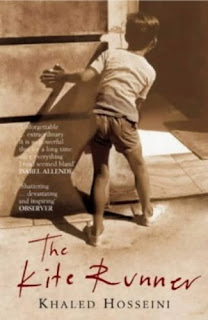 I recently finished reading 'The Kite Runner' by Khaled Hosseini. It is one of those books that leave a deep impression on mind, that make us pause during the hustle bustle of our daily lives, and think! Though the story is set in Afghanistan , but it rises above time and space , because it deals with issues that are universal. It is a story about friendship, loyalty, betrayal, longing for acceptance, courage, regrets, redemption and survival.

The story revolves around two boys _ Amir_ a privileged blue blooded Pashtun, and his Hazara servant boy _ Hassan. The two boys grew up together, Amir _ timid by nature, and Hassan_  courageous and  fiercely loyal and devoted to Amir. Amir is desperate to gain the approval of his father who it seems is more fond of Hassan than his own son. He resolves to win the local kite-fighting tournament to prove that he has the makings of a man. His loyal friend hassan_the fastest kite runner_ promises to help him. But neither of the boys could foresee what would happen to Hassan on the afternoon of the tournament, and what price he would have to pay to help Amir, which was to shatter their lives. And thus Amir's life becomes a long journey of regrets and remorse and finally redemption!

What i liked most about the book is its vivid description of Afghanistan. As soon as we think about Afghanistan , our mind conjures up an image of a country torn by war, landmines, Russians, drugs, mujahedeen and Taliban. But the author describes the old Afghanistan of 1960s and 1970s and he does a wonderful job! He paints a captivating picture of Afghanistan, with descriptions of the beautiful city of Kabul, snow covered mountains, and afghan tradition and culture. And then he paints another picture_that of Afghanistan after Russian invasion, and after years of war and Taliban, and the transformation is shattering. The contrast is devastating and it brings a lump of tears to the throat.

One more thing that i enjoyed while reading the book is the use of Farsi terms. There are words like Tashakor (thank you), Nang and Namoos (Honour and pride), Khastegar (suitor), Khoshteep (handsome), zendagi migzara (life goes on), and the wedding song _ Ahesta boro, Mah-e-man-Ahesta boro (Go slowly,my lovely moon, go slowly) . The use of Farsi terms deepens the Afghan touch of the book.

The phrase that has stayed with me from the book is ; "For you a thousand times over!" When Amir cuts the last kite in the kite flying tournament, and Hassan runs to bring that kite for Amir, Amir tells him ; 'Hassan! come back with it!" And the ever loyal Hassan replies; "For you a thousand times over!" This one sentence sums up the silent, undying and sacrificial love of Hassan for Amir. And this same phrase is repeated by Amir after almost twenty six years to Hassan's son, as a way of redemption and seeking forgiveness. Finally his conscience forgives him. Life has come full  circle for him!
Posted by Tasneem tapia
Email ThisBlogThis!Share to TwitterShare to FacebookShare to Pinterest